Blue Whale Apps is an Industry Leader in Miami! 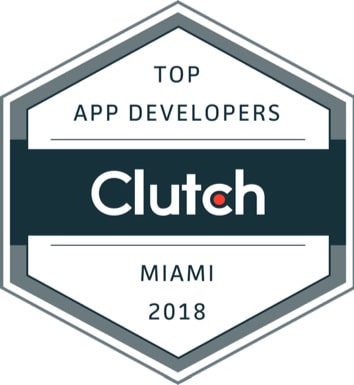 Blue Whale Apps is excited to announce our inclusion in Clutch’s annual press release on the Top B2B Service Providers in Miami. Clutch, a Washington, D.C. based research, ratings, and reviews firm, has identified their industry leaders across a number of segments and locations. Blue Whale has been identified in several of its research categories, including their list of the top app developers in Miami! We were also featured among their top 15 user experience agencies, digital design agencies, web development companies, and Android app developers in Miami.

The industry leaders in Clutch’s annual report have been selected through the analysis of client reviews, obtained primarily through interview style phone calls, as well as Clutch’s own market research and ranking system. Here at Blue Whale, we are very proud of our inclusion in Clutch’s release!

We are also pleased to announce our profile on Clutch’s sister-site, The Manifest! Blue Whale’s profile on The Manifest includes a brief overview of our clients as well as our recent projects! The Manifest has also listed Blue Whale as a top app development company in Miami!

The good news from Clutch does not end there! We are pleased to share our overall success on the platform as well. We have been ranked with a perfect 5-star rating from our clients! Not only do the reviews on Clutch come with a numeric rating, they also publish their reviews, allowing future clients to read in-depth feedback about Blue Whale’s performance. Check out a few samplings of our reviews from our clients:

“I honestly couldn’t run my company without Blue Whale to develop and maintain our app.”
“I wanted a team that would challenge my thoughts and offers suggestions on how to create a better app … and Blue Whale Apps certainly met that challenge.”

“I’ve worked with a lot of developers, and Blue Whale is in the top tier. I’ve been in the business for six years, which is not a long time, but on the Internet, it’s a lifetime.”

“It was a minor glitch, but it was something we needed to address right away. It was addressed and fixed in the iTunes store within days. It was just fabulous, the support I’ve gotten when I’ve had the problem with the app. I call them, and they re-create the crash or the problem and fix it. Within a couple of days, it’s fresh in the iTunes store. It’s great.”

“They’re professional, they’re organized, and they appear to have a process that they follow.”

We’re excited to be featured among other industry leaders in Miami, and we look forward to being included in Clutch’s report again next year.